“NPC” traditionally stands for “non-playable character” and includes all characters that aren’t actively played. In video game RPGs, these are the characters you don’t and can’t control which, except for MMORPGs, is basically every character in the game other than your player character. In tabletop RPGs, this is every character played by your DM/GM.

As writers, we control (or “play”) every character we write, even if they aren’t the “main” character, so “non-playable” is a bit of a misnomer in that sense. At ‘Souls, we use “non-player character” instead, to separate NPCs from the active, player characters to which they are secondary.

‘Souls NPC guidelines and NPC categories are explained in detail on the board. This guide assumes familiarity with standard procedures.

NPCs can help enrich the roleplaying experience by allowing you to reference and include more characters than you can actively play.

Often, for cNPCs and yNPCs in particular, NPCs are characters that players intend to play later, or which they intend to adopt out to other players. Having these characters as NPCs first allows players to begin developing them and their relationship with others prior to actually picking them up.

For example, if Frank has an active character Wolf whose cNPC is Wolf’s brother Wolfer, Frank can include Wolfer in Wolf’s various threads and escapades, and Wolfer can meet and interact with all of Wolf’s friends. Then, when Frank picks up Wolfer as a played character later, Wolfer already has these relationships that he can build on independent of Wolf.

Many players also use NPCs to fill roles that they might find boring or tedious to actively play. For example, some packs have NPCs whose primary purpose is to tend to livestock or to maintain a crop. Realistically, these are duties that are very time consuming, so it’s beneficial to be able to say a NPC is taking care of them, rather than having a player constantly reference their active character taking care of such responsibilities.

Another common use of NPCs is for fighting and combat, both with NPCs fighting alongside played characters and against them.

Many battle-centric plots involve killing NPCs, since they tend to be more disposable than played characters.  However, it’s important to remember that regardless of the involved characters’ status, all fights should be realistic. It’s unlikely that a single character will be able to defeat a group of five ganging up against him, regardless of how strong he is, regardless of whether that gang is comprised of NPCs or PCs.

While they’re limited to one canine cNPC and must specifically earn and request any yNPCs, characters at ‘Souls are allowed unlimited non-canine cNPCs within reason. Other-species NPCs can serve some of the same purposes as canine NPCs, but for the most part, they fall into the following categories.

Horses are, of course, the most common beasts of burden. Players should strive to treat horses as more than simply modes of transportation. Remember that they are animals with specific needs and considerations, too! Please see our Horse guide for more information.

Similarly, livestock species like cattle, sheep, chicken, etc, may exist primarily to provide meat, milk, wool, or eggs, but they also require space, care, shelter, and food, and players should consider those needs and their character’s ability to meet those needs before loading up with a large number of them.

Typically these are species that are “simpler,” smaller, and not high speech capable, such as songbirds and rodents. Often, these companions are dependent on their canine owner for specific care or protection, and would not survive without them (or otherwise cannot leave because they’re caged or have had their freedom restricted in some way).

For example, Coyote might keep and tend to a songbird he found with a poorly healed broken wing. The songbird depends on Coyote for food and shelter, since it realistically would not be able to survive long on its own, and Coyote keeps it as a pet.

As with beasts of burden and livestock, since pets require care from their owners, players should take care to limit the number any single character has. It’s unlikely that a canine would be able to, or want to, tend to the needs of a full out menageries, especially if any of them have special needs.

Ravens, crows, mid-level predators (such as wildcats), and other high speech capable species often fall into this category. These individuals are intelligent and independent enough to reject canines as “owners” or “masters,” but they may agree to cooperate with canines on certain tasks or otherwise act in mutual benefit.

For example, Wolf might have a crow NPC that keeps an eye out for intruders in a specific area in exchange for first dibs on Wolf’s scraps ahead of other crows in the area. Wolf might also have a cat NPC who hangs around the pack stables keeping out vermin.

Acquaintances don’t all have to be high speech capable species though. Say Wolf is able to communicate in rabbit low speech — she might even have a rabbit NPC who sells out individuals in its warren in exchange for personal safety. There are lots of possibilities!

These are the least restrictive of non-canine cNPCs as these NPCs largely take care of themselves and don’t place an unrealistic burden of care on their canine attachments.

As of July 2018, non-canine species whose ecological range are in red areas on this map are prohibited from being brought into ‘Souls playable territories with the intention of survival. 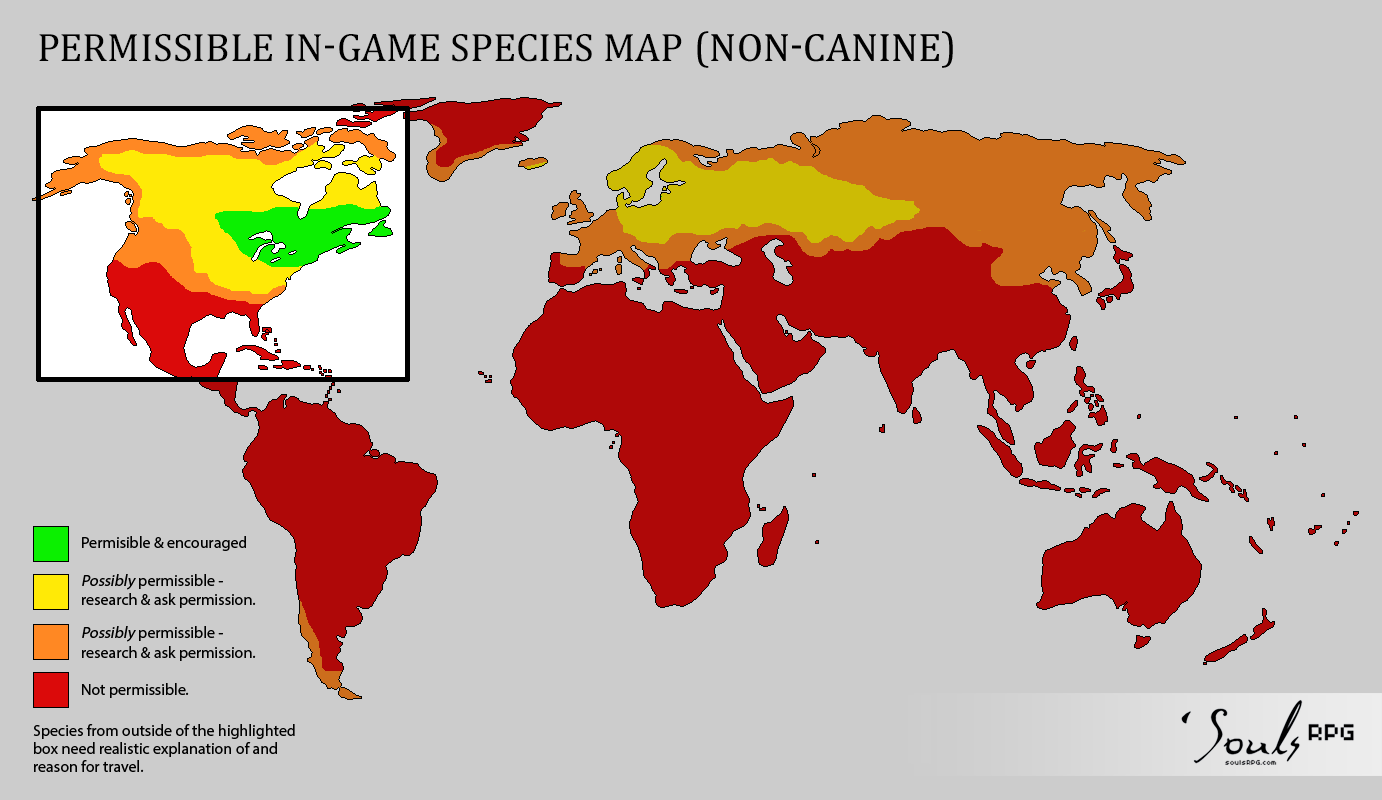 Players may seek permission for species from yellow and orange areas granted they’ve done prior research supporting the species’ survivability in Eastern Canada.

We don’t want or need anyone to write lengthy essays on the matter, but players should be able to adequately explain 1) how the animal got to Eastern Canada, 2) why it can survive there, 3) what measures are being taken to help it survive there, if any.

Single characters are allotted one canine cNPC, as many yNPCs as they request and are approved for, and as many non-canine NPCs as is reasonable. So there is no hard maximum, but players should keep in mind the relationship each NPC has to their character, and the feasibility of a single character to care for as many NPCs as they must care for.

Adult canine NPCs (including grown yNPCs) can usually take care of themselves, as can acquaintance/partner non-canine NPCs. It’s mostly in regards to beasts of burden and pet NPCs that players must be careful. Can your single character realistically take care of so many critters? If you’re unsure, do ask. In general, fewer is better, because it’s less to keep track of and keep up with for both the player and their character.

For example, a young, untrained character easily winning a fight against a powerful, battle-hardened NPC is godmoding. And as mentioned above, a single character beating five NPCs in a fight is also godmoding.

Similarly, players with multiple allowed canine NPCs attached to a character (say, a cNPC and three adult yNPCs) should take care not to only use those NPCs to do the character’s bidding. Though they may be “less important” than played characters, NPCs are still characters with motivations and thoughts of their own, and they should behave accordingly.