The ability of wolves and other canines to shift into a bipedal form is one of the many unique aspects of ‘Souls.

Our “werewolves” are known as Luperci.

In the years since human extinction, Luperci’s origins have become unknown to many, though some communities may have successfully preserved the knowledge. As the Z456 virus infected and subsequently wiped out humans in the late eighties, the virus mutated and began infecting animal populations. While many species were infected by the virus, the animals that saw the most interesting side effect were species in the genus Canis — wolves, dogs, coyotes, and jackals.

The virus caused a gene mutation, allowing canines the ability to shift into two other forms in addition to their historic, four-legged one. For a long time, despite this newfound ability, canines remained quite feral. Gradually, however, Luperci began to adopt more advanced, or perhaps “humanized,” lifestyles and cultures.

It is important to note that Luperci do not have human forms. Luperci were never human. They are canines with a mutated gene that allows them the ability to shift into a bipedal form, but they are not and never will be human.

Luperci have three forms: the Lupus (normal) form, the Secui (halfling) form, and the Optime (werewolf) form. Again: they do not have human forms (the human silhouette is included in the chart for size reference only).

The “normal” form. The Lupus form is just that. Think of an average, run-of-the-mill canine. This form bears certain advantages, including speed, agility, and stealth. Many feel most comfortable in this form, especially the young.

The “half-shifted” or “halfling” form. The Secui form is somewhere between Lupus and Optime form. Its body retains the general shape of the Lupus, though it is much more massive. Its build is heavier and bulkier in general, giving it more brute strength, and its thickened mane makes it seem even larger than it already is. Claws are retractable in Secui form, and despite their size, they are generally faster than Lupus forms.

The fully shifted form is a bipedal creature with opposable thumbs. The Optime form has the ability to manipulate objects with much greater dexterity than either of the other two forms. Body types can vary greatly among Optime forms, from the more traditional, more-feral looking werewolves, to much slimmer and more refined-looking individuals.

As many Luperci personally opt to become more humanized, certain characteristics can be groomed up to more human standards. For example, a long mane can be combed forward to emulate human hair by creating stylings and bangs. Though the Optime form retains digitigrade feet, making human-style shoes useless, some Luperci create other clothing to accommodate their unique anatomy. 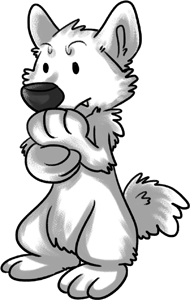 No matter what form a Luperci is in, they are comfortable with the movements and abilities of that form. Though the process of shifting can take some getting used to, there is no significant “adjustment period” where a Luperci must adapt to the body of their Optime form. Even after the very first shift, a young Luperci will know how to manipulate and move in its Optime form.

For Luperci Ortus, the process of shifting is neither complicated nor painful. In order to shift, all a Luperci has to do is focus on the change and it will happen. The process may take anywhere from two to five minutes depending on how experienced the shifter is. A young Luperci will take a longer time than an older Luperci, and one who shifts infrequently will take more time than one who shifts frequently.

For Luperci Verto, the change isn’t painful either, but they may perceive it as being such, especially for their first few times. It is much easier for Verto to get confused as their body changes, and it can end up taking thirty minutes to an hour if they are distressed.

Shifting is generally pretty methodical, though it can happen virtually any way you please so long as it’s not instantaneous.

Lupus to Optime: “She leapt nimbly upon the seat which she’d claimed as her own, sitting herself down nicely. Dark eyes stared forward and then shut as she began to shift. At first the only noticeable difference was the fur along her neck. It lengthened out; the short, rough hair growing long and silken. The next was her forelegs. In a seemingly painful fashion, upper halves lengthened, shifting her elbow downwards. Her haunches began to lengthen into thighs. Slowly at first, then a bit faster and faster, the raven alpha began to double in size. Her arms continued to lengthened, along with her hind legs, and with a crackle of bones, new joints appeared at her ankles and wrists. The toes in her forepaws began to lengthen as well, stretching out into dexterous fingers. Her ears moved slightly up her head, which had grown slightly to accommodate for the change in size her body had just underwent. Finally, her tail lengthened, the coarse sable fur layered thickly upon it becoming soft and velveteen.” 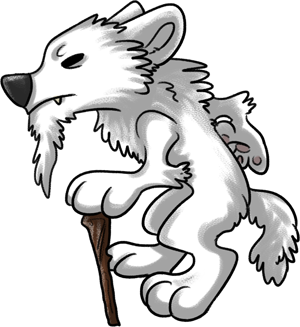 The Luperci have a longer average lifespan than their non-Luperci ancestors — an average of twelve years compared to the non-Luperci’s seven or eight.

Depending on a Luperci’s lifestyle though, they may die at a much earlier age from injuries or sickness — even in the most advanced of Luperci populations, medicine and treatment for diseases is very limited. In the same vein, if an individual is able to avoid harsh environments and chronic diseases, it is possible to live longer than average.

Because of the lengthened lifespan, the relative aging of Luperci is slightly different from non-Luperci, with the former experiencing a longer adulthood “prime.” As most canines remain physically active throughout their lives, few will show overt signs of deterioration until a year or two before their natural death.

Note: Various factors such as illnesses, health, and lifestyle may affect a character’s life expectancy. Dogs who show certain strong breed characteristics may be less healthy than their more mixed counterparts. Some breeds, especially large ones, are known for shorter life spans. For example, the Bernese Mountain Dog lives to be just seven years old on average.

For decades after the original onset of the Luperci virus, there were two types of Luperci.

The most common was the Luperci Ortus who is born with the Luperci gene inherited from at least one Luperci parent. The less common type is the Luperci Verto who is not born with the gene (i.e. born as a non-Luperci, a normal canine without the ability to shift), but was instead infected at a later date.

In November 2022, ‘Souls began to phase non-Luperci out of the game, eliminating the possibility for there to be Luperci Verto.