This page contains more advanced information and notes regarding Luperci.

A Luperci’s Lupus form is physically indistinguishable from a non-Luperci, but various changes manifest as it shifts to Secui and Optime form. If you’re not sure what a canine’s Lupus form looks like, do an image search! o_O

As a Luperci shifts into Secui form, the main flesh pad of the paw compresses somewhat in shape and remains small while the rest of the paw grows — as the Luperci’s fingers lengthen, less weight is put on the palm of the paw, lessening the need for a thick pawpad. Meanwhile, the pisiform (wrist pad) begins to shift downward towards the center of the paw, and the thumb digit gains a small pad.

When the Luperci is fully shifted into Optime form, the pisiform disappears, and the palm pad splits into three parts to facilitate gripping, grasping, holding, and various other hand functions. Optime forepaw pads are considerably less thick than Lupus or Secui pads as Optime do not generally walk on them, but they remain as a functional vestigial part.

A Secui form coat is not very different from a Lupus form coat. There are no noticeable changes in the body fur’s overall length or thickness, but thicker, shaggier mane begins at the base of the ears, covers the throat, and extends halfway down the back, giving the Secui form even more of a heavy, hulking appearance.

Like the other forms, the Optime form’s outer coat is thick with a softer undercoat. A completely natural Optime form has a thick, heavy mane which starts at the base of its ears and may extend halfway down its back. Depending on the individual and their personal preferences, a Luperci might decide to trim and change its mane into a particular haircut, braid it, or style it. Optime forms also have longer tufts of hair on the backs of the thighs and elbows, although some choose to trim this, as well.

The Secui form is similar to a Lupus, but heavier and larger. The halfling is muscular like the Optime form, but maintains a four-legged stance. It has a wider chest, and very large paws with retractable claws.

A halfling is much faster than both the Lupus and Optime forms, with top speeds of 55-60 miles an hour for wolves — however, the Secui’s endurance is only about half of the Lupus’s endurance. In smaller species and breeds, the Secui skull may be quite massive compared to the Lupus form, and is roughly the same size as the Optime form’s.

An Optime form’s body is bipedal and humanoid, though they retain a canine’s digitigrade feet and are much heavier due to muscle density. They are slower than both other forms, with top speed capping at twenty-five to thirty miles an hour for wolves, and have less endurance than the Lupus form. This form has both opposable thumbs and retractable claws, allowing for easy manipulation of objects and far more dexterity than either of the other forms.

The differences between the three forms allow each to have certain advantages and disadvantages. Many Luperci make full use of their forms, preferring certain forms for certain purposes. However, some might stick strictly to one form or another and even shun some forms due to cultural or religious traditions.

For traditional tasks like long-distance running and exhausting prey, the Lupus form can’t be beat. This form has the highest endurance by far. It’s also the smallest, which can be useful for reconnaissance, espionage, and fitting into tight spaces.

The Lupus form is ill-adapted to complex tasks requiring detail work and dexterity. Paws and maws are not suited to things like harvesting plants, gathering pretty pebbles, or securing belt buckles.

In more feral communities, Lupus form is, of course, the preferred default. Individuals from more humanized societies may look down on the form and avoid it once they’re of shifting age.

For many, the Secui form is a tool for intimidation. Its hulking size compared to the Lupus form can be a huge boon, especially for smaller species like coyotes and jackals.

Secui can also be used for bursts of quick travel — it’s much more convenient and often faster than a horse! The primary disadvantage is high energy consumption. A Secui can cover a lot of distance quickly, but they’ll be very tired afterwards, especially if they’re shifting back to a different form at their destination. After all, shifting takes energy too!

Additionally, for most, maintaining Secui form also takes a certain amount of constant energy. It is a convenient “halfway” point between the two other forms and it isn’t difficult to stay in the form, but those who fall asleep in Secui might find that they’ll wake up in either Lupus or Optime form.

That being the case, it’s fairly unusual for Secui to be an individual’s “default” form. Some feral communities might utilize the form for hunts and fights, taking advantage of the extra raw strength it provides while still being very natural in terms of stance and movement. More humanized Luperci might also utilize Secui for battle, as the form is similar in size and weight as an Optime and teeth are still superior to handheld weapons in many instances.

Having opposable thumbs opens a lot of doors for Luperci — literally! Optime form allows for the creation of and use of tools, from weapons to instruments to quills and paintbrushes.

This form is the slowest, but its endurance is better than the Secui. The raw strength of Optime form can vary greatly between species and individuals, however. For example, an Optime form wolf will, of course, be stronger than a Lupus jackal, but an Optime jackal may not be as strong as a Lupus wolf by default — after all, they’d be roughly the same size as a human and a human is definitely not as strong as a wolf by default!

Still, raw strength isn’t everything, and an Optime jackal could certainly best a Lupus wolf in a fight if experience and circumstances are in its favour.

More humanized Luperci societies naturally gravitate towards their most humanoid of forms. Optimes can write and draw and dance and express themselves in many more ways than their other forms. Use of tools, as well as written communication, is the foundation of advanced civilizations, so use of the Optime form is functionally required for complex societies.

Still, some communities may consider the Optime form a curse to be avoided. Humans had this shape and met a sudden demise — are Luperci to meet the same fate? 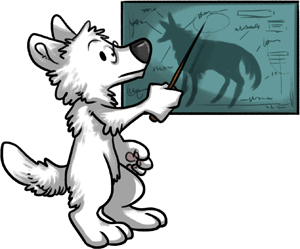 An individual Luperci’s size is generally consistent across forms. Larger-than-average wolves are larger-than-average in their Secui and Optime forms. Other characteristics of build, such as slenderness or musculature, also tend to translate across forms. Species also plays a role in Luperci sizing, although differences between Secui and Optime forms are not as significant as those between natural Lupus forms.

As within humans, there are extremes of stature and weight found in all canine species. Some individuals may be very tall while others may be very short. Generally, anything outside of a species’ basic range is considered extreme. These extremes may present problems for characters. A very small character might have difficulty protecting itself, whereas a very large character might have difficulty using some human artifacts, which are generally designed for average-sized people.

The following may affect size:

The following charts provide general measurement ranges for various size types (small, average, large, etc.) of healthy gray wolves, coyotes, and jackals. The ranges cover both sexes, but males will tend towards the larger end of a given range, and females, the smaller.

Because dog breeds and some species of wolves are very varied in their “average size”, compare the average Lupus form measurements of your breed/species with the “normal” row of the following charts to determine the one most appropriate for your use.

Note: Weight ranges are more flexible than height ranges (and some ranges overlap), especially considering a variety of healthy body types. In general, when considering Optime forms, Luperci will weigh more than an average human of a given height, as Luperci live more active lifestyles and have denser muscle mass as a result. A fur coat can be quite heavy as well! Secui form ranges are given as the average halfway point, but again, this form can vary greatly.

Any character in the tiny range of their species will generally require some kind of disorder to cause their smallness. These disorders have associated health problems:

Any character in the giant range of their species will generally require some kind of disorder to cause their largeness. These disorders have associated health problems: 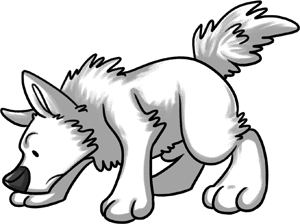 The first type of immunity is viral immunity. Canines with viral immunity may have the Z456 virus enter their system briefly, but it cannot actually infect them — their bodies are pre-equipped with the antibodies necessary to fight off the virus before it ever takes effect, and the virus is flushed out of their bodies within a short period of time.

This prevents the virus from ever causing the genetic mutation that allows them to become Luperci. However, a virally immune character may be able to infect others if the virus very, very recently entered their system (1-3 days).

The second form of immunity is genetic immunity. Genetically immune characters may contract and are technically infected by the virus, but the virus cannot cause the requisite genetic mutation and they do not become Luperci.

Genetically immune characters who have contracted the virus can infect others with the virus indefinitely.