It may be helpful for you to begin with a short list of traits and descriptors rather than a full-fleshed personality — it’s much harder to think on the fly and create traits for your character while keeping proper grammar and sentence structure in mind. If you have some general ideas for a character, try writing them out in a brief list format with bullet points:

Your list will probably be longer, but now you can expand upon this information. Consider to what degree your character displays these personality traits and how they acquired them. With explanations for each bullet point, not are you shaping personality, you’re getting your character’s history done, too!

From these points, you can continue to expand, work, and rework until you’re happy!

A character flaw is a limitation, imperfection, problem, phobia, or deficiency present in a character. A flaw can be a problem that impedes the character’s actions and abilities, such as a violent temper. Alternatively, it can be a simple foible or personality defect, which just affects the character’s motives and social interactions. Don’t forget: weaknesses are just as important as strengths!

Make sure your character has at least a few flaws, whether major or minor, physical or mental. Flaws make a character interesting to play and give real character depth; no one is perfect and it gets very boring, very quickly if your character has no weaknesses and always knows the right answer. Some flaws may include: 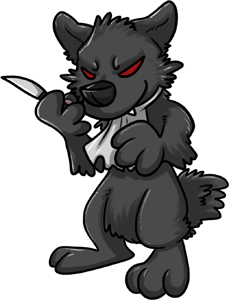 Many roleplayers find it fun to roleplay an “antagonistic” character – that is, an “evil” character that serves to stir up trouble. This can be tons of fun for all involved! However, make sure to keep some key points in mind.

Although your character has many humanized aspects of personality, they are still an animal. Dominance, submission, and a pack mentality are deep-rooted in canine instinct. Even a rebellious wolf will submit to a pack leader on his packlands — or face the consequences!

Coyotes as a species may be a bit more independent and wary of other canines while dogs may be more friendly and eager to meet others. Working and herding dog breeds like shepherds and collies may be more inclined to hard labour than others. Species and breed traits don’t need to be the end-all, be-all of your character’s personality — it’s okay to play a husky that hates to work — but remember, you’re playing an animal, not a human!

Your character, like people in real life, has the ability to change. Are you really going to enjoy playing the same character for months, or years, even? Dynamic and changing characters are far more interesting than static characters who retain the same personality.

Many roleplayers damage their characters physically and emotionally over the years, bringing down innocence and hope with callousness and cynicism, though some start with an already damaged character and work them toward sanity. Either way, character development is a crucial aspect of roleplaying, and if your character has no room to grow, you’ll quickly become bored with them!

If you’re having trouble figuring out a personality from scratch, try a “base” — that is, a descriptor of common personality. Tweak it to your liking by removing parts you don’t like, adding new parts, and by the end you should have a unique character. You shouldn’t try to emulate any character base precisely — it can lead to “stereotypical” characters — but it can make a great starting point if you’re stuck.

For an in-depth look at these alignments and for examples of characters that fall into each alignment, please refer to the Wikipedia article on the subject. EasyDamus also provides an excellent summary of the different character alignments with tons of information about how each would act and interact.

You might consider using different Zodiac signs as a character base — there are multiple traditions of zodiac, and multiple signs within each. They’ve been used for a long time to describe personalities and so you’ll find a wealth of information relevant to each.