Humans have been gone for thirty years and counting, but evidence of their existence remains all over the world. Cities of crumbling buildings and broken artifacts remain, and Luperci have rooted through all of it.

This page goes into depth about the realistic deterioration of human-made things and Luperci-made alternatives to commonly-sought structures, goods, and tools that just aren’t around in usable condition anymore.

“Concrete jungle” is moniker suitable for most urban areas. In warm areas, paved streets are cracked wide open by rampant plant growth and vines twist up the sides of buildings of all heights. In cold areas, winter ice breaks open the same streets and building facades, exposing the innards to the elements.

At a glance, it can be difficult to tell just how deteriorated buildings in cities actually are, which makes them especially dangerous for Luperci to be around. Foundations and walls alike are cracked and ever-cracking, prone to collapse without warning. Crumbling structures can often set of a chain reaction and a wandering Luperci that isn’t careful might find herself suddenly trapped in a cascade of falling walls.

Still, many areas have already done their share of major collapses and the walls that stay standing may be stable for the time being. Nevertheless, Luperci aren’t likely to settle in heavily urban areas for long periods of time if they can help it. Though prey may be plentiful in the form of rodents, birds, cats, foxes, and even wild pigs and deer, signs of life are often still overshadowed by a consistent air of rot and decay. In many large cities especially, human remains can be unearthed quite easily beneath the shallow layer of overgrowth.

At this point, many suburban and rural areas are almost indistinguishable from nature untouched by mankind. They’re overgrown with plants, shrubs, and young trees, and the rotting foundations of homes are buried somewhere beneath the fresh green.

Settlements with brick or concrete buildings, rather than easily-rotted wood, may stand out more against nature, but even they’re likely to be extremely decrepit, with missing walls, roofs, and doors, broken windows and frames, and collapsed structures.

Human buildings are extremely dangerous to live in at this point. The structural integrity of buildings (especially tall ones like apartment buildings, office buildings, and multi-story houses) have been severely compromised as a result of time and exposure to the elements. As ‘Souls takes place in a snowy climate, one must take into consideration snow and ice damage – even modern houses can collapse due to snow accumulations on roofs!

It’s also not uncommon for homes in the north to have basements; while some floors may be able to stand the test of time, it’s likely that the weight of a heavy Luperci would strain a house’s floor enough to break, and send them falling into a forgotten basement. 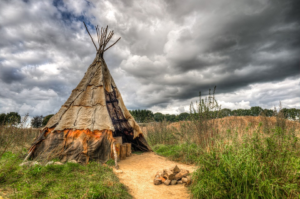 The most realistic human-made home for a Luperci would be single-story homes made of brick or concrete — and they would be overrun with nature and be missing windows, doors, and oftentimes, walls or roofs. If a building is dilapidated enough, they could use the structure as a lean-to rather than a house proper, and this is an acceptable and realistic use of old human architecture.

Luperci themselves are not advanced enough to make complex structures (there are numerous areas of study that Luperci would need to learn from scratch in order to do so), but they may be able to augment human-made structures with their own creations. Think deerskin curtains for separating “rooms”, “blinds” made of skins or leaves for covering old window holes, and flooring made of fur or wool. On their own, Luperci could make structures such as rudimentary lean-tos, huts, or tipis.

Human-made books found in good, usable, and readable condition are prohibited at ‘Souls as of July 2018.

Paper is extremely fragile when abandoned to the elements. Water, humidity, sunlight, wildlife, insects, etc, are all very harmful to books and exposure has ruined the usability of most human-made texts in the post-human world.

Luperci may still find and keep human-made books, but they’d be missing covers, have loose binding, have water-damaged or sun-bleached or moth-eaten pages or mold, and so on.

As literacy spreads among more humanised populations of Luperci, some Luperci may have started writing books of their own. And while their hand-written and hand-bound books made of hand-made paper and leather can be just as fragile as human books, Luperci-made books would, most likely, have always been in Luperci care, passed from one owner to the next, rather than exposed to the wilds.

Like books, human-made clothing and fabric found in good, usable condition are prohibited at ‘Souls as of July 2018.

Clothes are fragile even in modern times – they are susceptible to damage from the elements, can tear or rip easily, and are eaten by a variety of bugs such as moths. Thirty years into a post-human world, all clothes are damaged heavily, and can be found torn, discolored, shrunk, stretched, warped, or otherwise in extremely poor condition.

Human-made clothes are unlikely to be worn by Luperci anyway — Luperci bodies are vastly different from human bodies. They are much taller and thicker, with a wider range of movement, and most human-made clothing wouldn’t fit a Luperci adequately.

Besides which, Luperci don’t need clothes — their fur is good, natural protection from the elements, and most clothes would only serve to restrict a Luperci’s movement. Still, some Luperci may wish to wear clothes for self-expression. Although most human-made clothing would not fit a Luperci well, Luperci can make their own clothes: deerskin and wool are options, and natural dyes can be used for color.

Luperci would almost always be hindered by wearing shoes, and we discourage the use of shoes at ‘Souls.

Jewelry and trinkets are allowed, but it’s important to note that most (if not all) would be heavily damaged by the elements. It would be almost impossible for a Luperci to find a delicate, thin chain necklace in good condition, for example.

Thick jewelry made of steel and other hard metals may have survived better, but would still be tarnished and dirty from the outside world, and Luperci may not be inclined to pick these dirty objects up and place them on their bodies or have the means (or know how) to clean them.

Luperci may opt to make their own jewelry as well. Realistic Luperci-made jewelry might include necklaces or bracelets with a catgut or leather cord base, and decorated with interesting-looking rocks, shells, bones, or sea glass. The most common sea glass colors are green, brown, and white. Red, orange, and yellow are very rare, and shouldn’t be found in abundance.

Remember that Luperci don’t have a sense of how “valuable” or rare a certain metal or gemstone might be — a ruby might appeal to a Luperci just as much as some white sea glass, or more, or less. Decorative items, especially those that are bulky, cumbersome, or distracting, may even be thought of as less than useless by practical Luperci.

Other Items and Tools

Other human-made items will have suffered through similar damage and may be found in various states of wear, some usable, some not. Iron rusts. Plastics warp. Wood rots. Other organic materials do too. Animal products are eaten. Things comprised of many parts, especially small and intricate parts, fall to pieces and those pieces become easily scattered, or else those pieces rust or are melted together.